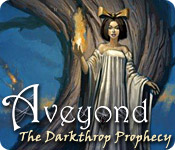 Welcome to the Aveyond: The Darkthrop Prophecy Walkthrough! Mel can use magic and she's not happy about it. Worse, little dark creatures are following her and calling her their queen! Whether you use this document as a reference when things get difficult or as a road map to get you from beginning to end, we’re pretty sure you’ll find what you’re looking for here. This document contains a complete Aveyond: The Darkthrop Prophecy game walkthrough featuring annotated screenshots from actual gameplay! We hope you find this information useful as you play your way through the game. Use the walkthrough menu below to quickly jump to whatever stage of the game you need help with. Remember to visit the Big Fish Games Forums if you find you need more help. Have fun! This walkthrough was created by Amaranth Games, and is protected under US Copyright laws. Any unauthorized use, including re-publication in whole or in part, without permission, is strictly prohibited.

For maps, tips, locations and contents of secret goodie caves, data tables filled with information about weapons, armor, items, monsters and more, plus details on how to play, purchase the full length strategy guide.

4. Convince Te’ijal and Galahad to Help

9. Obtain the Stone of Aya